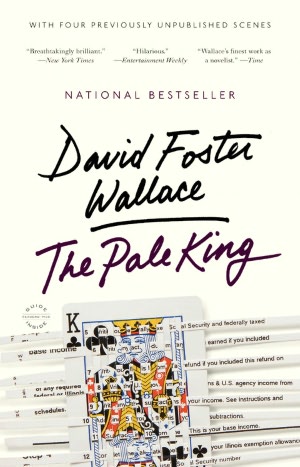 The Book Cover Archive, for the appreciation and categorization of excellence in book cover design. The IRS & Wallace's The Pale King. I am the cataloger of David Foster Wallace's final work, The Pale King, and I'm here to tell you that in cases like these, the rules will only get you so far. This is not to say that David Foster Wallace cared for Hamlet. But he seemed to care for ontology. Looking at the language of critical response to the novel, there are parallels. From yesterday's BBC article “Outrage grows at IRS 'targeting' of conservative groups:”. The preview, a collaboration between the Center and publisher Little, Brown and Company, includes a series of drafts of the “Author's Foreword,” which eventually became chapter nine of The Pale King. The Pale King is, in a word, profound. The structure then partly seems to be that the characters in The Pale King work at the “IRS Regional Examination Center in Peoria, Illinois,” but their stories are told (partly) through their childhoods. Big chunk to talk about today, in a less summary fashion below: The wheels start turning and characters start reappearing in this chunk of The Pale King and we keep returning to the same themes.